Westinghouse is a subsidiary of Japanese tech giant Toshiba and the designer and builder of the four under construction AP1000 nuclear reactors at Vogtle and Summer. The reactor design is yet to be operational anywhere in the world. The projects in both South Carolina and Georgia have been plagued with problems and are nearly four years delayed and many billions of dollars over budget. In fact, all four reactors were supposed to be operating by now(April 1, 2017 to be exact).

Toshiba has reported that their losses, which are in excess of $6 billion (and climbing) because of the failed nuclear projects in Georgia and South Carolina, have created “substantial uncertainty” over its ability to continue operations, which is also affecting its other tech businesses. Toshiba’s financial meltdown puts these new reactor projects on even shakier ground.

Georgia Power, SCE&G, and Santee Cooper, as well as Toshiba and Westinghouse, took a significant gamble on nuclear power and lost, leaving consumers holding the bill for billions of dollars. We need your help today to stop this abuse and tell the utilities and regulators to stop throwing good customer money after bad! 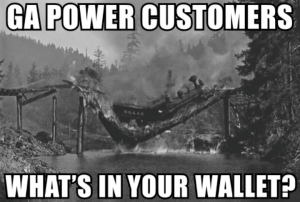 Vogtle Units 3 and 4 were originally scheduled to come online April 1, 2016 and April 1, 2017, respectively. Revised schedules from Westinghouse, as disclosed in their February 2017 earnings call, estimated the completion date of Vogtle Unit 3 as December 2019 and of Unit 4 as September 2020 but testimony from Georgia Power in the 16th semi-annual Vogtle Construction Monitoring (VCM) docket before the GA PSC stated that December 2020 project completion is not possible. Expert witnesses for the PSC Staff are estimating project completion may be even further delayed — to June 2022 and June 2023 with massive cost increases. Georgia Power is 45.7% owner of the project and is regulated by the PSC. The remaining utility partners are Oglethorpe Power (30%), MEAG (22.7%) and the City of Dalton (1.6%). Learn more here. 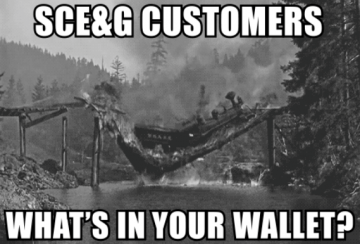 In 2007, the state legislature passed the anti-consumer Base Load Review Act, which allowed utilities to begin charging customers for the financing costs for new power plants before they are built. In 2009, the South Carolina Public Service Commission (SC PSC) approved SCE&G’s request to build two Toshiba-Westinghouse AP1000 nuclear reactors at their V.C. Summer nuclear plant near Jenkinsville along the Monticello Reservoir (formed by the Broad River), about twenty miles northwest of Columbia, South Carolina. SCE&G is a 55% owner in the project and is regulated by the SC PSC. Santee Cooper is a 45% owner. Problems ensued almost immediately, resulting in major delays and cost overruns, but the SC PSC has continuously approved SCE&G’s nuclear rate hike requests. V.C. Summer Units 2 and 3 were originally scheduled to come online April 1, 2016 and April 1, 2017, respectively.

On July 31, 2017, the Santee Cooper board voted unanimously to abandon the project, after announcing the findings of internal analysis that showed:

SCE&G followed suit, unable to complete any portion of the project without Santee Cooper as a partner, and announced they too would be abandoning the project.

What happens next in Georgia?

The utility partners in the project must decide what to do: will they abandon the project as South Carolina’s utilities did, will they delay, will they continue building one or both of the reactors, and if so, who will build it? There are few companies in the world with the capability to do so. Southern Company announced that is it receiving cost-to-complete analysis and bids from Fluor and Bechtel, potentially in August.

What happens next in South Carolina?

The political fallout from the cancellation of the project is huge and is unfolding in real time. Every day brings new information and possibilities to light, so it is hard to say what will happen next, but it’s clear that the utilities, regulators, and state legislators are on the hot seat.

SCE&G has proposed merging with Dominion Energy from Virginia, but to do so, the merger must first be approved by the South Carolina Public Service Commission, which will likely hold the case hearing in late 2018.

In the meantime, the General Assembly has filed numerous bills to help deal with some of the core issues that led to the V.C. Summer failure and its financial fallout. None of the bills go far enough to truly end the monopoly corruption, but some of the bills tackle essential problems. For example, there are bipartisan bills filed to: • repeal the Baseload Review Act; • ban campaign contributions from regulated utilities; • promote solar freedom and get rid of the utilities’ arbitrary cap on how many customers can sign up for fair terms when installing solar power at their home and business; • remove bureaucratic barriers from utilities using the lowest-cost energy resources; • finally create a real consumer advocate who can fight bad utility proposals.

What are these projects costing ratepayers?

Major delays in project construction cost customers a lot of money. Each day of delay costs customers millions of dollars. With the projects already nearly four years delayed, the costs to consumers add up fast.

Georgia Power customers are already paying more than 9.7 percent of their monthly bills in Nuclear Construction Cost Recovery (NCCR) costs. Nearly $2 billion in these pre-collected financing costs have been charged to ratepayers since 2011 due to anti-consumer state legislation passed in 2009 to incentivize building new reactors. This “nuclear tax” impacts many types of customers — homeowners, schools, municipalities, small businesses and it all adds up. The Vogtle project’s original approximated cost of $14.1 billion is now estimated to cost well over $20 billion.

V.C. Summer’s owners are SCANA’s SCE&G at 55% and Santee Cooper at 45%. According to the South Carolina Office of Regulatory Staff, the average SCE&G’s residential customer is currently paying over 18% of their monthly bill or over $27 per month in pre-collected financing costs (totaling over $1.4 billion so far). This comes out to about $1,500 per household already paid for the plant. SCE&G plans to spread out the $4.9 billion of plant abandonment costs over the next 60 years, meaning several generations will be paying for these mistakes. Santee Cooper has spent $4.7 billion on the plant and has raised rates on customers five times to help pay for construction.

Sarah Gilliam
This blog was written by a former staff member of the Southern Alliance for Clean Energy.